a friend from the north

this is me with my new friend, faser, who travelled down to london yesterday from scotland with brian's friend, sharon, and who's come to live with us. 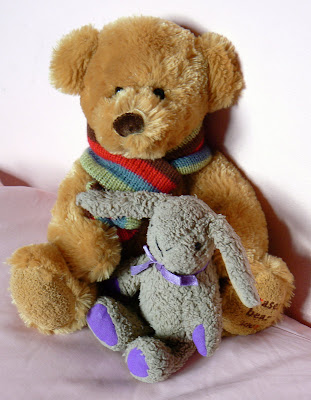 i asked him how he came to be called fraser and he told me that it was written on a label on his bottom which, frankly, i didn't believe till he showed me! 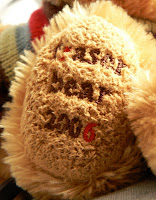 understandably you don't (necessarily) want to be always showing people your bottom as proof of identity, so fraser has also had it tattooed on his left foot which is really pretty cool!

i've introduced fraser to bodge and the others and we are all going to be great friends; he's already offered to lend me his scarf if we happen to get another cold snap.

fraser knows some fantastically bad and very long poems that i'm going to bore brian with and he's started teaching me scottish. i'm dead impressed because, rather amazingly, he's already managed to pick up quite a few words in rabbit!
Posted by buttons, courtesy of Brian Sibley at 09:03 5 comments: