as anyone who knows her will tell you, hippolyta is not really a 'morning person': the hours between sunrise and noon are – understandably for a diva – reserved for the necessary cultivation and preservation of her legendary beauty.

however, the upset over the mouse who turned out to be a rat, left her feeling abused and abandoned and sleep was a total impossibility.

after a seemingly endless night of anguish, I eventually managed to console her and help her see that, as vivien leigh says in gone with the wind, "tomorrow is another day..."

and so, together, we greeted the dawn on the last day of our holiday... 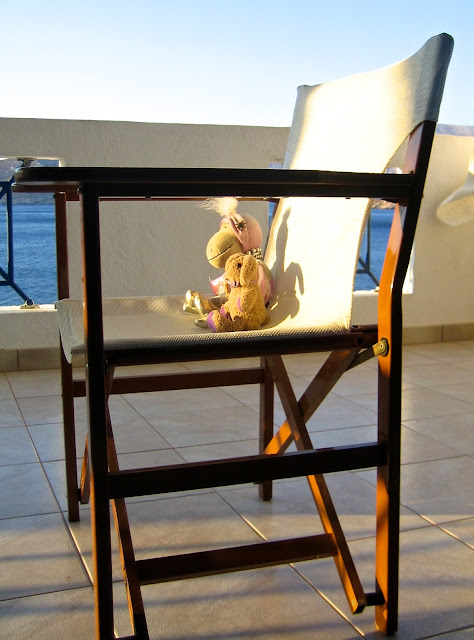 determined to pay out the rat who had so badly wronged poor hippolyta, buttons hippo and i pursued his yacht with the assistance of our trusty inflatable bambi, which, in the circumstances  i considered poetic (or, more accurately) filmic justice... 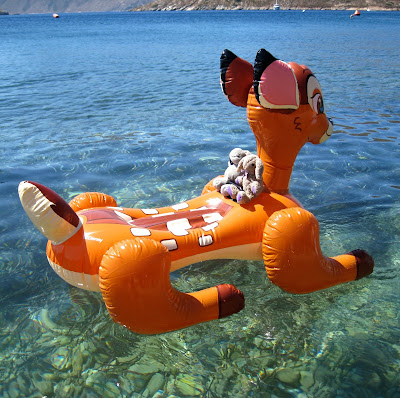 we eventually found our quarry sunbathing on a bay further round the coast, so we snuck up on him... 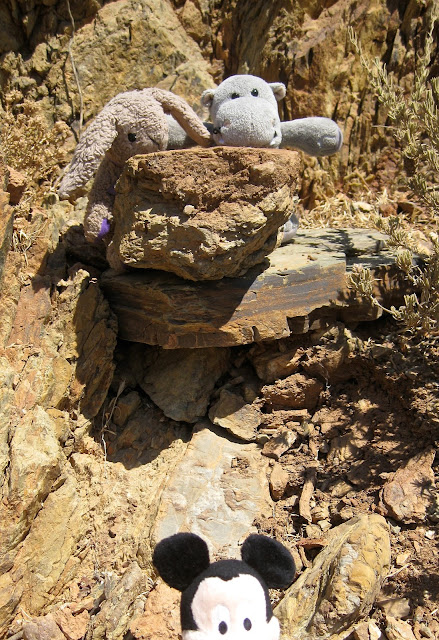 ...gave it the teensiest of shoves - scarcely more than a nudge... 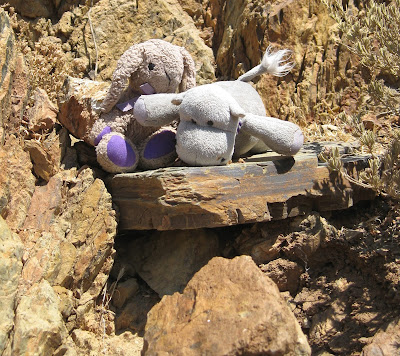 ...and left the rest to gravity! 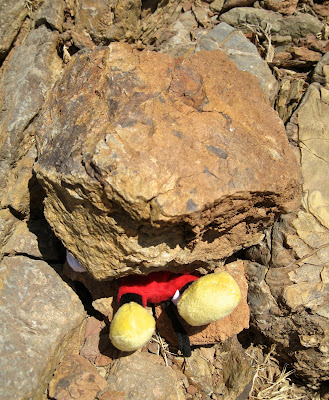 after which we just had a jolly good laugh!

my worst fears have been realised! the yank has turned out to be an even worse cad than i anticipated: overnight, he up-anchored and vanished!

not only has he abandoned hippolyta who is devastated and is sitting in her room with mascara streaming down her cheeks sobbing, "i'm ready for my close-up mr de mouse...", but he has also filched the script of a disaster movie that roger was hoping to sell to brian's friend peter jackson; set in greece, it was entitled goats on a boat and will undoubtedly be at a cinema near you sometime in 2014.

buttons hippo and i toyed with buying a boat to go in pursuit of the mouse, but it turned out we didn't have enough euros even if brian went without ice creams for the remainder of the holiday... 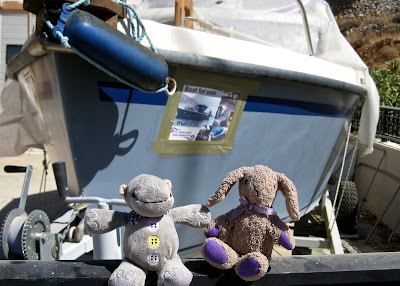 all chance may have now gone of a hacienda in the grounds of hippolyta's beverley hills mansion, but we haven't yet given up hope of getting our revenge on that black-eared villain...


Posted by buttons, courtesy of Brian Sibley at 00:00 No comments:

we are staying at a truly international venue where big yachts from all over the world come into the harbour on a daily basis.

today a boat sporting the american flag arrived owned by a vip who can truly be described as a big cheese.

since arriving he has done nothing but talk about his studio in hollywood, the films he has made and the oscars he has won...

buttons hippo did his best to sell a treatment for his memoir, carry on up the limpopo, and i actually thought he was going to strike a deal, but as soon as the visitor saw hippolyta (she was relaxing under a parasol by the pool with her first tequila sunrise of the afternoon) he lost interest in b h's proposal and started talking about how he was going to make hippolyta into the new marilyn monroe.

"more like the new margaret rutherford," said buttons hippo cruelly (i thought), retreating to his room with a  bottle of bourbon. but now h is totally smitten with the yank (with his ludicrous red shorts and yellow boots) and is on the point of signing a three picture deal which will whisk her off to the other side of the world to fame and fortune and out of my life for ever... 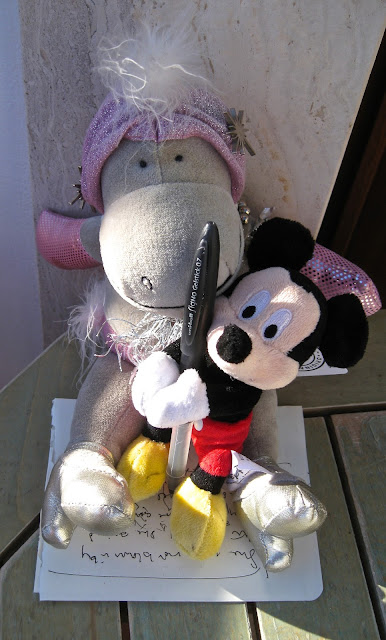 Posted by buttons, courtesy of Brian Sibley at 00:00 1 comment:

my austrian pal, hasi, has just flown in and so i got a chance to introduce him to hippolyta and buttons hippo... 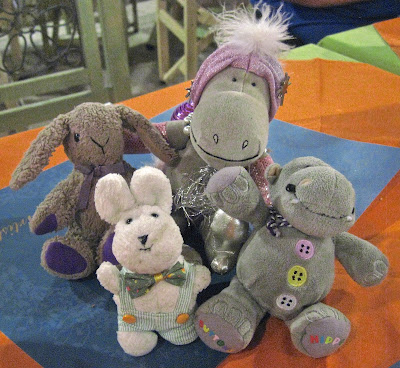 in fact hasi seems to be getting on so well with buttons hippo (who is regaling him with selected yarns of limpopo) that h and i may be able to get a bit of quality time just to ourselves... 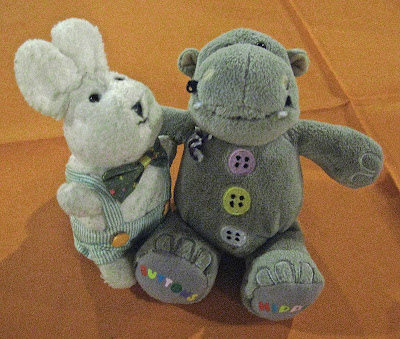 while hippolyta was busy signing post-concert autographs, buttons hippo and i sloped off and had a go on this kiddies' ride... 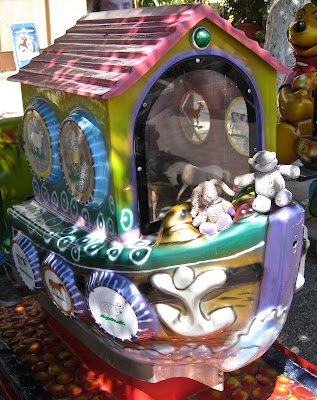 there were other more exciting ones – including a police helicopter – but brian, who's got a bit of an ark fixation (probably because he is old enough to have came out of it) insisted we use this ride.

as far as we could tell the rabbits and hippos on this particular ark went in one by one!

Posted by buttons, courtesy of Brian Sibley at 00:00 1 comment:

hipploylta is such a star it is impossible to maintain my usual anonymity while travelling with her.

no sooner had we hit town than she found a stage and was instantly into her one-hippo show. as you can see, i was the supporting artiste: "a rabbit, a song and a smile"... 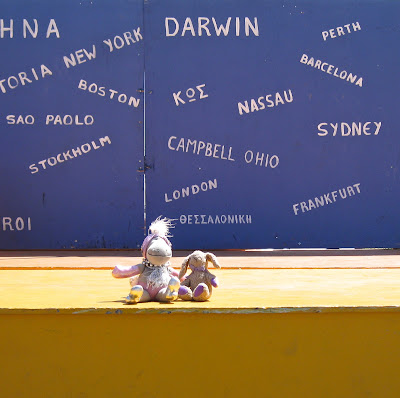 later on, she played the local amphitheatre for an unforgettable performance at which buttons hippo (yes, he eventually rumbled the fact that the early christian baths never had visitors) and i had top-price seats - compliments of hippolyta's management... 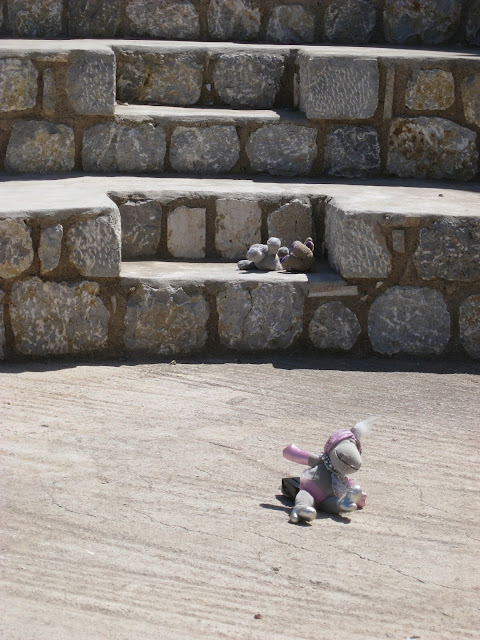 as you can see, we were bowled over and totally knocked out by h's finale rendition of "mud, mud, glorious mud"...

Posted by buttons, courtesy of Brian Sibley at 18:14 No comments:

you may have wondered whether hippolyta travelled to greece this year without my cousin buttons hippo and, if so, how h and I are managing to spend a little quality time in private (see my last post) without his inevitable presence...

well, yes, he did come, but we managed to convince him that the local mayor had personally asked him to undertake an important local job of giving guided tours to the daily coach-parties of international archeologists visiting the nearby early christian baths.

that's him waiting for them in the bottom right-hand corner... 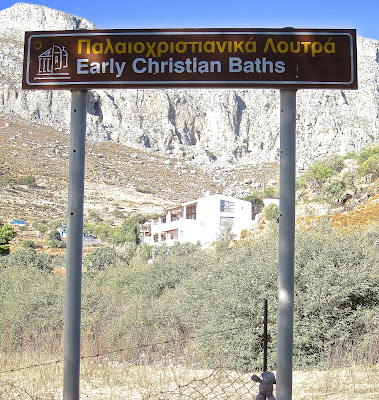 as he is still waiting for the first coach to arrive, this ruse may not last for long, so h and i just have to make the most of every precious minute!

Posted by buttons, courtesy of Brian Sibley at 07:15 1 comment:

first chance i've had to blog since coming on holiday...

after a pretty boring week with just brian and david, things have looked up now the glamorous hippolyta is here and we can relax in the sun and plan the rest of our time together on this charming greek island... 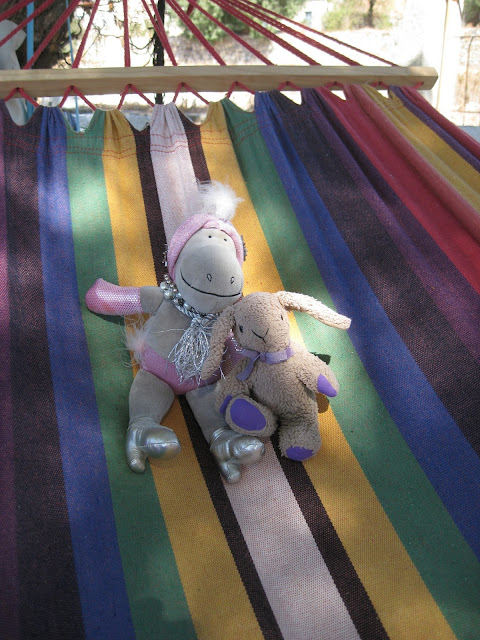 Posted by buttons, courtesy of Brian Sibley at 14:43 1 comment: