when i heard that the artist antony gormley was asking people to take part in an event entitled one & other and stand on a plinth in trafalgar square as living statues for an hour every hour of the day and night for 100 days, i told brian to put me up for it.

then, yesterday, what do i see on that plinth but a rabbit!!! 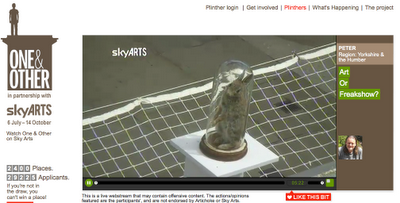 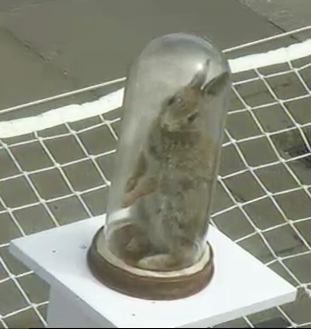 as it turned out, it didn't do very much and i don't know how he managed to breath under that dome thing for almost an hour, but he was definitely up there!

you can see the film of the whole thing - if you have an hour of life to waste - but i doubt if you'll be much wiser at the end!

naturally, i confronted brian about the whole thing and guess what he said? he said the rabbit was stuffed!

as if!
Posted by buttons, courtesy of Brian Sibley at 08:30 4 comments:

a piece of cake

did i mention i went to brian's 60th birthday party last week?

well i had to, didn't i? after all, when you're that old you need all the support you can get - and, apart from any other considerations, there was chocolate cake on the menu...

Posted by buttons, courtesy of Brian Sibley at 14:52 2 comments:

round and round the garden

brian and david took out in the garden the other week - not their garden of course which is filled up with the playhouse of the people downstairs and populated not only by occasional children, but - worse - frequent foxes!

and had a chat with humpty dumpty who, i'm glad to report, is back on his wall...

i also found myself on the horns of a dilemma...

...at least that's what brian said it was and he ought to know because he's been on them often enough!

the photos are by brian - he insists i put that in, he says for copyright reasons, but we all know its just feeding his vanity! - and you can see more of his and david's garden snaps (though i've no idea why you'd want to!) on his flickr album, up the garden path.
Posted by buttons, courtesy of Brian Sibley at 09:21 6 comments: