these two turned up just before christmas. they said their names were 'buttons' but i wasn't having that, so i've called them 'kris' and 'kringle' - and it looks like they're here for the duration. they maintain that they are more long-lost cousins of mine, but i'm not that gullible: i may have a hippo for a cousin, but i know i'm not related to any bears even though some of my best friends are.

apart from which, they are quite disruptive - it's one long christmas party with these two 24/7. when i get back home i'm going to have to get bodge and the other bears to try and take them in hand -- or paw!
Posted by buttons, courtesy of Brian Sibley at 00:01 3 comments:

i can't ignore fame when it comes knocking: here is my greatest fan, hippolyta hipp, and my coz, buttons hippo, reading my blog, yesterday... 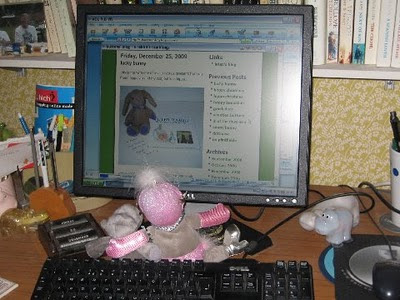 now, tell me honestly, is this blog becoming too self-referential - or even, heaven help me, too self-reverential?
Posted by buttons, courtesy of Brian Sibley at 04:49 4 comments:

this is me with one of my christmas presents from my friend hippolyta and my coz, buttons hippo...

very acceptable, although chocolate hippos would have been bigger!
Posted by buttons, courtesy of Brian Sibley at 00:01 2 comments:

i hope you all get lots and lots of goodies
and have a very jolly time!

had the following greeting from the president of my fan club, hippolyta (looking ravishing on the right below) who is a house-mate of brian and david's friends, roger, sheila and my coz, buttons hippo... 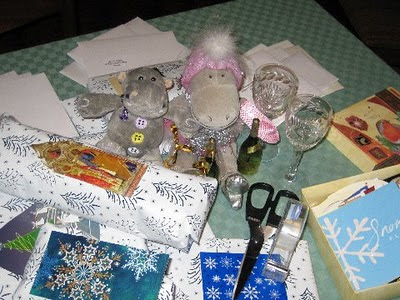 Well, here we are again: it's Christmas time and you're probably about to go jet-setting off to some exotic holiday location while I'm stuck here.

I wanted to let you know that R & S are sending a parcel to B & D, so your cousin and I have taken the opportunity to put a little something in it just for you! I would have sent you some champagne (my favourite tipple) but Buttons Hippo said it would be wasted on you, so we drank it ourselves. I must say, your cousin does go on a bit, doesn't he? After a glass or two of bubbly, there's no stopping him. I've heard more about life up the Limpopo than anyone would ever need to know.

Well, I'm sure I hope you have a lovely holiday and we'll all look forward to seeing your photos some time in 2010 (actually I just put that bit in to be polite).

With love from your no. 1 fan,

thanks, hippolyta, have a great christmas and do your best to keep buttons hippo off the sauce or the stories about the limpopo will get longer than the river itself and you'll want to go there - and drown yourself!
and here's a picture of hippolyta's garden in the recent snow with, i assume, one of her entourage taking a constitutional. 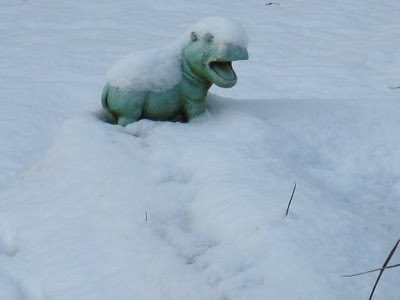 "Hippolyta won't go out in case she gets her Jimmy Choos dirty (unless a chauffeur carries her to the stretch limo to all the balls and parties) and Buttons Hippo is sulking because we won't let him make a snow hippo until he gets some wellies."

i never cease to be surprised by the differences between rural and city life!
Posted by buttons, courtesy of Brian Sibley at 08:47 2 comments:

Posted by buttons, courtesy of Brian Sibley at 16:03 2 comments: